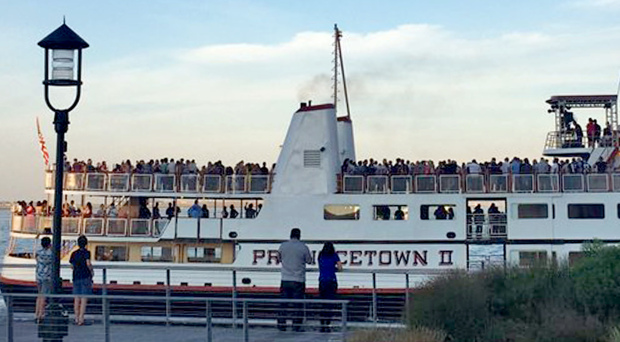 Marty Walz is anything but an expert picture taker, yet she got a shot on her cellphone Saturday night that is making a significant buzz via social media.

She and a companion were gone to Pier 4 to get take-out supper when they recognized a horde of individuals strolling down a gangplank and onto a pontoon.

“I could hear the noise coming off the boat and see the large crowd of people,” Walz said. “So that’s when I grabbed a photo of it because it was so shocking.”

What stunned Walz – and numerous who later observed the photograph – was the absence of COVID-19 precautionary measures the individuals who swarmed the top deck of the Bay State Cruise transport appeared to be taking.

“It was just breathtakingly crowded, given that we’re in the middle of a pandemic,” Walz said. “It’s obvious from the photo and from what I could see that as passengers were boarding there was no social distancing.”

“As the boat went by us I was just stunned to see so many people being so reckless,” Walz said. “Because even if they wanted to take their own health into risk, they get off that boat and expose everybody else around them, potentially, to COVID-19.”

“The picture that was taken from Pier 4 this evening was of our harbor cruise vessel getting underway for a 7 to 9:30 p.m. cruise,” said Bay State Cruise chief Michael Glasfeld. “We sailed at 33% capacity. The deck areas of our vessel provide for 28 square feet per passenger (the area of a six-foot circle) for up to 44% of our vessel’s capacity.”

While there might be a lot of land on the boat to spread out – that had all the earmarks of being the issue, Walz said.

“It was a beautiful summer evening. Maybe some people were on the lower deck,” she said. “But nearly everybody was along the top deck and it was very crowded.”

Glasfeld said the boat is viewed as an outside scene that has the additional COVID-defensive impact of moving at nine bunches – in this manner giving a consistent breeze.

“We have a semi-enclosed middle deck as well that, at nine knots, exchanges its entire volume of air in less than one minute,” he included.

“Even outside, the virus can spread,” she said. “So it’s not enough to say well, we were outside. You’re in close proximity to other people. This is an event that could lead to large numbers of people getting COVID-19.”

Walz didn’t understand the effect the photograph had until she returned home from supper Saturday night.

“This morning it’s getting retweeted multiple times so it’s getting renewed attention,” she said. “It has really, I think, struck a nerve among those of us who are trying very hard to social distance, to wear masks, and keep people around us safe.”

Eventually, Walz said she posted the photograph for general wellbeing.

“If we don’t try to stop the things we see we’re gonna have a massive outbreak of the virus again,” she said. “And we all need to take action to keep ourselves safe and stop things that are going to potentially kill people.”