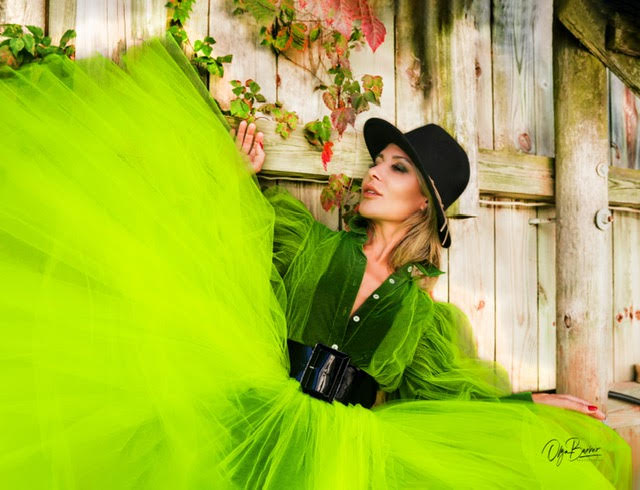 Olga Ferrara is the New York City-based influencer took her passion for fashion and traveling to another level when she tapped into Instagram as a medium to channel her creativity. She jumped into the social media frenzy full force in 2013 and has been soaring ever since. To date, she has amassed over 230,000 followers.

One look at Olga’s feed and you can see why people gravitate towards her. Her posts are fun and genuine. Being unique is Olga’s specialty. Straying from the all-black trend that’s consistent with life in New York, she has chosen a more colorful path. That choice is what immediately draws you into her Instagram feed. It’s how she expresses herself.

“I’ve always liked different. I’ve always liked unique,” – the self-described “dreamer” came to the United States in 2002 from Ukraine. Growing up in Crimea, she was told not to stand out, which made her learn to embrace what makes her different. Even from a young age, she was adding splashes of color to her dark-toned school uniform. “As a little girl, I was dreaming of moving to Paris,” she explained after detailing how she used to give her friends makeovers. “Paris has always been the center of fashion.”

When she came to New York, she explored what she wanted to do. She had gone to school to become a pharmacist, but when she found herself on the East Coast, she discovered that she was free to be her unique self. She fell in love with the city and even earned the nickname, “New York.”
She knew that beauty and fashion were in her heart, so she went to beauty school to find herself there. She honed her skills as an entrepreneur, helping with her husband’s business, and continued to flourish in life. While the business was venturing more into the entertainment side of things, Instagram was beginning to pick up speed. Everything began to line up. As Olga did more traveling and now had a platform to get her message across, she was able to share her passions with the rest of the world.

“I love to express myself in a positive light,” Olga says. It’s her uplifting outlook and cheery nature that eventually earned her another nickname – “Sunshine.” Now a world traveler with a passion for fashion, Olga has become a powerful influencer, sharing her inspirational messages with others.
So, what’s the step-by-step process that Olga used to make a name for herself in the digital space?

“It started very simply. I was posting my daily outfits and selfies. Every day, whatever I was wearing, I chose to share it,” she explained. “I was doing that for a while, and then I stopped because I got bored. I began to get comments from my followers, asking me why I stopped.” It turned out, just by Olga being Olga, it influenced other people. And those people were now looking to her for guidance on what to wear.

She then knew that she had to do something more. That’s where her passion for travel came in. Taking photos in beautiful outfits, while surrounded by stunning views, garnered her even more attention. Olga became inspired. She began channeling how she was feeling while in different parts of the world and used fashion to express that. It wasn’t long after that, offers came in from companies that wanted to collaborate with her – and even send her on those exotic trips that she has always dreamed about. For Olga now, fashion shows and vacations to Paris are a part of her daily life.

In her quest, Olga discovered other things and people that aligned with her mission in making the world a better place. “If I see the opportunity where I can help and do something good, I’m always there,” she tells. Olga donates her time and efforts to different charities. One foundation she has worked closely with is Maya’s Hope, which goes to help children in Ukraine. “It’s not only about me in a dress,” she explained. “That’s just a way to bring attention to something. Then you make people see things in a positive light. Show them how they can do better things in this world. Even in daily life. It’s about trying to put people in a good mood so they can be more productive, so they can enjoy life in general.”

Olga tries to show people that it doesn’t have to be about donating thousands of dollars. “There are so many people in this world. If we can all put together a little something, a little part of us, it can be very helpful. Sometimes, it’s good to remind people that together, we’re all able to help more than just one person can.”

If you want to become an influencer, Olga notes you should understand that it takes a lot of time and money to achieve your dream. Overnight success doesn’t exist, and paid partnerships don’t just come out of nowhere. It takes a while, and even then, don’t expect stability. Things change hour-to-hour, depending on different companies and their priorities.

“I would say if you want to be an influencer, be true to yourself. Have your style that you want to keep,” she advised. “Do what you really love. If it’s your passion, and it makes you happy, keep doing it no matter what. It’s going to be hard; it’s going to be disappointing just like any other business, but it comes with so much satisfaction when you really love what you’re doing. It’s not all about money; it’s also about expressing yourself and creating relationships all over the world.”

When it comes to growing a following, there isn’t a universal answer for everybody, because everybody’s different. “It depends on your audience and what you do,” Olga says. “Your content has to be the best quality, post every other day, and engage with your followers. I try to answer every comment. Likes are good, but comments mean more.”

Olga’s content tracks like the story of her life. She doesn’t believe in deleting photos; instead, it’s about bringing in more pictures to add context and layers to her already rich experiences. In the end, if you want to be an influencer, there is really only one hack: Be yourself. Be entirely, utterly, unapologetically unique. That is the best way to influence the world.

More information about Olga Ferrara you can find at: