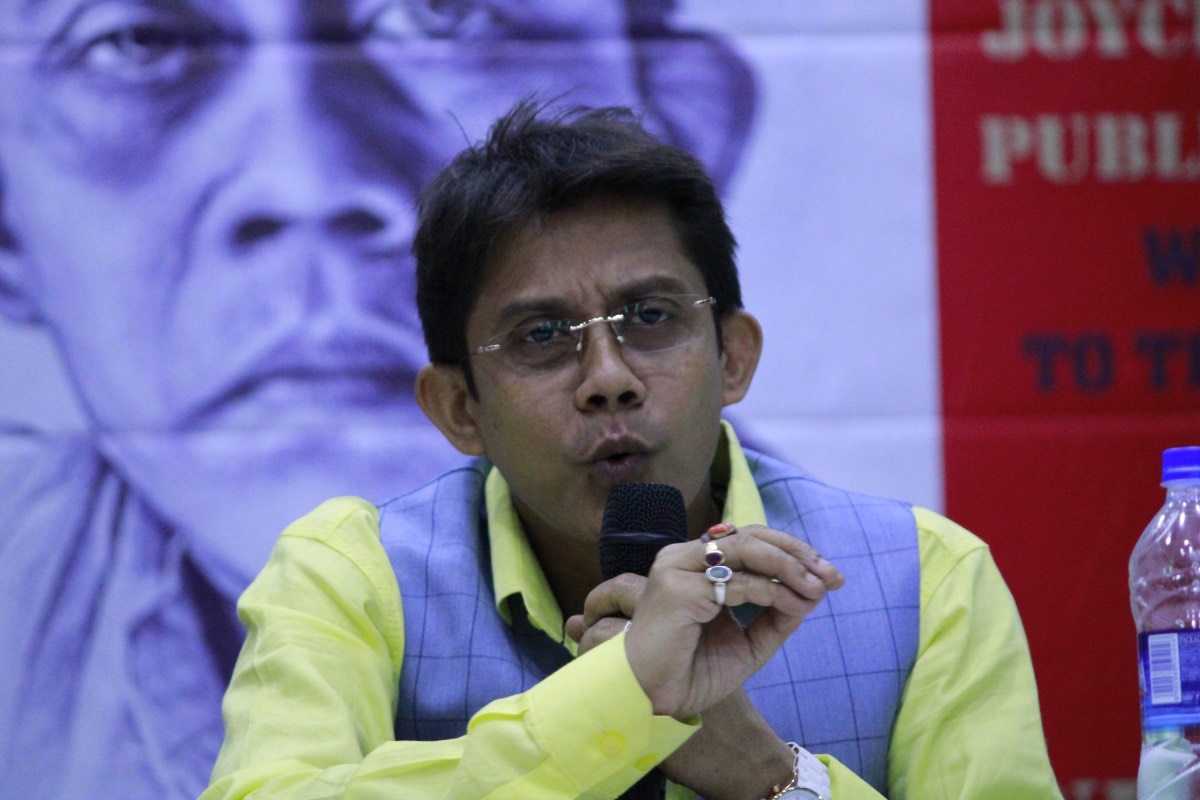 How popular is the Indian Telegu author Muppala Ranganayakamma? Or how popular is the American author David Markson? The answer is that they are not populist writers, rather they are both niche writers; and what they write are not bestsellers, rather classics, as their works are esoteric. Nilotpal Roy is such a cult writer with a cult group of followers. He is a sui-generis thinker “with a meticulosity bordering on the insane”. (quoted phrase from James Joyce’s ‘Finnegans Wake’; Book I; Chapter 7; 173.34) Yes, “insane” is the right word for him, because the creative eccentricity of this man scattered in the pages of his books, keeps on startling you every now and then and forever! Although writing since last 23 years, this maven has remained virtually less discussed like the oriental Ranganayakamma and the occidental Markson, as he always stands amidst the opposition, and hurls uneasy questions to the system with his vociferous pen. He writes with equal flair in two languages ― in English, and in his vernacular Bengali; and he amusingly says that he writes in English with his left hand, and when he writes in Bengali, he uses his right hand. It means that his flair for writing in Bengali is even more cerebral than his cerebral English pieces. In his every book, even the apparently commonplace things, like the ‘cover page’, the ‘dedication page’, the ‘quotation page’, make you feel the cerebral wit of the writer, who is essentially an arch-enemy of convention. Whenever you expect something customary from him, you get “a slap in the face of public taste” from him. According to his own creative concept, in the front cover-page of his each recent book, every letter of the author’s name appears as “burnt match-sticks”; which, as if, has become physically distorted by the pain of being burnt, and thus have turned into different letters of the English and Bengali alphabet. It symbolically indicates the existential angst and the crisis of the creative entity of the writer. In all his books, whether English or Bengali, the name of the author appears in this very same manner, which has become his own exclusive watermark, his individual thumb-sign. Unlike other writers, he vehemently refuses to introduce himself to his readers with his academic credentials, and in the traditional way of showcasing a biographical sketch. Let us have a look in the blurbs of his last two books!

‘Nilotpalnama’ (meaning ‘Nilotpalesque Prose’) is the title of his Bengali non-fiction book (of essays) published in 2019, the sub-title of which is ‘Jonoiko Shobdo-Dhangorer Mogoj-Mojdurijato Aya’ (meaning ‘Defecations sired by the Cerebral Exertion of an Onymous Word-Scavenger’). The about-the-author section of the back-blurb of this book states : “Doesn’t believe in institutional certificates. Farts away age, academic degrees, and designations. Outknowledge is his first priority, trusts logic and reasoning, and never gives indulgence to emotions. Doesn’t hanker after patronization, hates obsequiousness, and calls a spade a spade.” Actually, his books neither entertain the mediocre readers, nor allow them to ruminate in the status quo of culture’s clichéd comfort zone. As a bi-lingual novelist, essayist, poet, playwright, short story writer, literary critic, and commentator on culture, so far, he is best known for his bold, maverick, and unforeseen styles of writing, as well as for his unconventional ways of thinking, as he offers with effortless ease, a sojourn to cerebral literature. His ‘Nilotpalesque Prose’ seems indecipherably chaotic to the unprepared readers, as the riddles of his language are prone to trap his readers in their respective subconscious matrices of thought. Here language becomes a tendency, a phenomenon to which his readers fall preys as he lures them to psycho-penetrate into his language’s indigenous absurdity.

‘Pastiche of Angst’ is the title of his experimental English fiction published in 2016, the sub-title of which is ‘The Polylithic Analects of a Schizophrenic’. The back-blurb of this book introduces the author like this (with each ‘not’ and ‘never’ underlined) : “Nilotpal was not born on 29th February like Superman, is not an illegitimate heir to Bill Gates, is not even the remotest kin of Stephen Hawking, has never been invited to deliver a ‘James Joyce Lecture’ on the grand international event of Bloomsday celebration by the Oxford University, has never worked in NASA, has never made an expedition to South Pole, has never photographed the footprints of a Yeti, has never been mobbed for his autographs amidst the public thoroughfare, has never been invited in the Buckingham Palace to dine with the Queen, has never dated Aishwariya Rai, has never unveiled his own statue in the Madam Tussauds Wax Museum, has never refused the Nobel Prize in Literature, has never won 50 million Rupees in ‘Kaun Banega Crorepati 5’, has never hit six over-boundaries in six consecutive balls of a single over, and many many many such naughts. In lieu of idolizing and identifying himself with Spiderman or Batman or He-man or Superman, he chooses to be a ‘Penman’. In fact, Nilotpal never wants to be the second Pascal or the second Bergson or the second Wittgenstein, nor even the second Māgha or the second Joyce or the second Borges or the second Kamalkumār. He, rather, always prefers to be the first Nilotpal … no one expects mediocrity from God, Devil, and Nilotpal.”

The indications are evident here. Whereas, in the 19th century, India was a savage land of black-magic practicing witches, levitating saints, and illiterate snake-charmers; and in the 20th century, it became a bragging land of ‘refined mediocre’ Nobel laureates and/or OSCAR winners like Tagore, Ray, and Sen; now, in the 21st century, it has become a land infested with merely ‘crude mediocre’. In such a country, now entirely of-the-mediocre, for-the-mediocre, and by-the-mediocre, very few care to learn about Pascal, and Bergson, and Wittgenstein; and even fewer dare to read ‘Pensées’, or ‘Time and Free Will : An Essay on the Immediate Data of Consciousness’, or ‘Tractatus Logico-Philosophicus’. Actually, he never calls himself an ‘author’ as he rather prefers the term ‘penman’ which is his own coinage. According to him, the true yardsticks of an exceptional thinker’s and/or writer’s extraordinaire should be ― “Māgha’s ‘versatility of inventiveness’, Joyce’s ‘fecundity of thought’, Borges’ ‘fastidiousness of analyticity’, and Kamal Kumār’s ‘infinitude of erudition’, all these assembled together” ― Māgha and Kamal Kumār being two cerebral genii of Sanskrit and Bengali literature, respectively.

If we look into another book of him published in 2004, entitled ― ‘And Pus and Blood and Semen and Sweat and Vomit and … et cetera’ ― containing 14 poems and 4 short stories in English, we see that this book most aptly implements the literary term ‘anti-literature’ coined by the British poet David Gascoyne in 1935 to describe literature which turns traditional rules and conventions upside down. The Indian website of Amazon says : “Notorious for amalgamating oriental realities and occidental fantasies with his own life in his writing, this book of Nilotpal Roy has been feted for its superfluity of language as well as its candid expressiveness. … Whereas, on one hand, in the poems, the nuanced verses imbued with personal themes and supplemented by philosophical motifs hypnotize the readers, on the other hand, in the stories, the avant-garde narrative technique and the bordering-on-the-absurd plot mesmerize the readers to provoke them intellectually. This book is a must read for those who prefer off-the-beaten-track literature.”

In fact, his works are written with rebellious narrative forms as well as an anachronistic jumble of labyrinthine style and anomie-imbued content ― all these being the substance of his vision as an author, symbolizing post-postmodern man’s anxiety-ridden and grotesque alienation in an indifferent and hostile world. His effervescently inventive narrative forms and multitudinous diversity of scattergun techniques using collage, cut-out, fusion, montage etc. enmeshing the ‘avant-garde’ underpinnings of his texts exhibit the endless process of interchange between his ‘language of thinking’ and his ‘language of writing’. The myth of narrative has been vehemently rejected by him as he hates the age-old tradition of story-telling. His works are never thematic and in several cases merely handy repositories, where his merciless satire, sarcastic criticism, and even the most wry self-caricature is overtly severe, as are his fecundity of language and almost superhuman erudition.

If we also glance onto another book of him published in 2004, we are simply astounded looking at the title of the book. I would rather not say a word myself here, and just quote what the Indian website of Amazon states about this book : “This book is like a raw sewage, the first ever book of ‘pensees’ written in Bengali language. A juxtaposition of personal and impersonal fragments, impregnated with cerebrally nefarious and rancorous thoughts, this book explores the dialectic existence of the author as an unbiased witness of his own time. The sporadic ramifications of these vignettes, emerging out of the socio-psychological experiences of the author, reflect the perils of a precociously fecund mind. The title of this book has no letters or words from any alphabet of any language; it is just an Ideogram character that means ‘quest’. This book symbolically signifies the classical quest of every individual on earth, as a human being, and henceforth the title of the book can never be pronounced or read, (neither aloud, nor silently); rather it can only be viewed, and understood ― or not understood at all. This book is an unputdownable piece of cerebral literature, which is the first of its kind in the Bengali language.”

Writing with an exceptionally creative eccentricity since 1997 as a first-of-his-kind writer, if his works conflate elements of the novel-story-drama–poem-essay-critique-lecture and so on, that is to produce a wholly new genre, for which, even in the beginning of the 3rd decade of the 21st century, there is as yet no proper name or term; and as he writes in-between the lines and in-between in-between the lines, this new ‘Nilotpalesque Genre’ goes on creating countless ‘gaps’ or ‘lacunas’. The inherent, subversive, self-contradictory and self-betraying elements of his text ‘include’ what is not in the text, what is outside the text, what is not said. The elements referred to above ‘include’ assumptions and propositions. What is not said constitutes a gap, ‘lacuna’ or ‘aporia’. Here, ‘aporia’ means a kind of ‘impasse’ or insoluble conflict between rhetoric and thought. It suggests the gap or ‘lacuna’ between what his text means to say, and what it is constrained to mean. This is what is termed as the ‘Nilotpalesque Aporia’. He invites his readers to experience the seeking-out of those ‘aporias’, blindspots or moments of self-contradiction, where his text involuntarily betrays the tension between rhetoric and logic, between what it manifestly means to say, and what it is nonetheless constrained to mean.

Nilotpal is one of the most maverick authors Bengal has ever produced, and each piece of his Bengali and English writing caters itself as a literary vortex where all the plentitude and indigence of this prolific thinker’s capacity and incapacity to write with arduous symmetries and language-labyrinths, co-exist. The 21st century must read him.

How to become a Digital Entrepreneur – with Manuela Fantini