Searching for Mr. & Mrs. Perfection A Valentine’s Day Special 2 of 2 – By New Frank 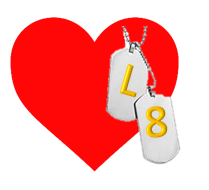 Part one (Finding Mr. and Mrs. Perfection) is about learning how to love yourself before you can love someone else. Today, we conclude part two (Searching for Perfection). This Valentine’s day, if you can’t be with the one you love, then take solace in this fantastic story that someone told me in Alaska. Don’t forget to grab a cup of ice cream.

The sound of the evening, the tune of a soul singer, Johnny Taylor, plays on an old Jukebox. The song “We’re getting Careless with our Love.” There are too many soldiers and not enough beer in the pub. The men raise their glasses high and toasted with laughter and half-salutes. The overflow of the alcohol submarine into the cracks of the wooden floor. The year was February 13th, 1975, when unsuspecting young officers from all walks of life push through the front door, joining loose women and friends at community gatherings. Sunrises will come knocking soon at the heart of each soldier, the dance will stop and they will venture to another mission. Soldiers with shore leave raids the local pubs to liberate their pinup emotions just in case, tonight was their last celebration.

The handwritten farewell letter protruded from John’s jacket pocket. Waitress girl, dancing with her hips, moves seductively on the dance floor. She approached John and locked eyes with a welcome smile. She recognized the importance of these letters that must be written. She waltzes and touched his side, pushing it back into his pocket with a sleight of hand. John is never the wiser.

Patty, the waitress, always takes care of the men in her pub. John held her hand, twisted her, lend her back, and slowly lifted her with his strong arms. John stood square, bowed his head, “Thank you for the dance,” said John, and started walking away. Patty grabbed him by the shoulder, turned John back into her face again, and inserted a kiss on his cheek. ‘When your mission is over, you should come back for a drink,’ she said. John nodded, “You can count on it.”

As night fell, sunrise came knocking early that morning, the young soldiers sat in the back of the trucks, the blue sky extending over the open land. The road was lined with endless Greenfields, and they saw the mountains in the distance. Eight trucks moved in a straight line. John sat in the last truck, closest to the rear gate, looking out from the side, and they called it a window seat. John was a black man among seven white officers, John was an officer also, and despite the different civil rights of the era, the men learned to respect John, who survived 27 missions without a scratch. John was a God-fearing man who taught them affectionate gospel songs.

John sang and they clapped together in the back of the truck. Whether the angels showed John favor, they wanted to be near him in times of combat. The military said they were the “Lucky Eight.”

This is their last mission, and all the eight soldiers could go home and be reunited with their families. If today, the 28th mission, will be John’s last, he will die among friends and without any regrets, except never asking Patty on a date. It’s Valentine’s Day on February 14th, and they don’t celebrate romantic love, but love that most people will never experience. They will lay down their lives for each other; one cause, one fight, one chance for all eight to come home.

War! Hot metallic fragments sailed through the air, leaves fell from the trees above, and mud hung from the faces of a Lucky Eight so far unwounded on the battlefield, others are not so fortunate, men falling all around. In the thick fog, you hear soldiers ask for the physician to ease their agony. The cry of battle and thunderous bangs, moving machines, ears numb. The sound of peace resonated, leaving some soldiers pausing in the middle of the trenches, looking dejected and wondering how am I still alive? “Keep Moving!” said Officer John, hitting a soldier on his back to snap him into reality.

Muddy footprints going over rugged terrain, one of the lucky eight steps on a land mine. The other seven had no choice but to move forward, and the enemy was approaching too fast. John stopped and made a circle. “Listen! I have to go back and make sure, Anthony is alive,” John looked at them and added, “You’re the lucky six now…, give this to Patty.” He hands one of the men named Mark, his farewell letter from inside his coat. They all embrace John for his bravery, Mark speaks, “It’s been an honor!” the other five salutes. “Meet you at Patty’s Pub,” said John. “You better be there, John! And bring Anthony too,” said Mark.

They face-off and run in opposite directions John doubles back to Anthony’s position where he was surrounded by enemy forces, laying inside a fox hole. John’s heart pounds so fast, he could turn and run, his friend, Anthony, looked dead from a distance. He had to be sure, waited till night and John covered himself in mud and crawled on his belly under the enemy nose. He made it to Anthony, felt his pulse on his neck, nothing, he was too late to save Anthony.

He put his head on his leg, tears streamed down his eyes, and his brother, who had been on 27 missions, was gone. John smiled and said, “One last song” John looked up to the sky clapped his hands, and started singing. Ben E. King (Stand by Me). The enemy heard John singing and five men approach like tigers looking for a fresh kill. Guns pointed at John, he showed no fear, and John kept on singing with passion with eyelids closed, tears flowing down, cover his face. John was finally going home, to see this place they call Heaven, he was ready.

The leader of the five men, order the killing. John kept singing. “Shoot!” he said. One of the men opened fire, his gun jammed, he orders the men to shoot, again and again, nothing happens. The leader of the five men stepped out in front and said “Shhhh…” John stopped singing, he continues speaking “You have protection, you live for a special reason, and this is my favorite song!” He turns to his four men and says “Leave! These people are not our enemy, please continue singing.” His men walked away in bewilderment, John sang louder, heavy rain began to come down, John raises his hands to give thanks and praise to be alive, the mud dislodges from his face and hands and Anthony coughs. He was alive! Anthony’s eyes opened. John is mesmerized, but smiles with tears of joy, “Let’s go home,” said John. Anthony smiles and nods in agreement.

The Lucky Eight was reunited with their families, John and Patty stayed in her home country and made a wonderful life. His friend, Anthony, stayed there as his immediate neighbor, and every Valentine’s Day, the Lucky Eight would meet at Patty’s Pub. True Perfection is to be with someone that knows all your imperfections. Happy Valentine’s Day.

In Memory of Demetrious Johnson, we did it! I miss you so much!

Thanks for getting me out, and all years you stood by me! Happy Birthday!

Della, Polk, Sadie, Shirley, Barbara, Watu, Consuela, and Wanda, you’re all fantastic Mothers, thanks for all your support, much Love!

In memory of the falling soldiers around the world, may we find a way to end all wars.

Comments or questions, drop me an email: [email protected]

1. (Johnny Taylor) singer we’re Getting Careless with our Love https://g.co/kgs/DeUMF5